The first annual Pickman Guitar Festival kicked off at the Exchange in Regina on Sunday.

Organizer Jayson Brinkworth said it was a celebration of the guitar playing community in the city.

“[It’s] a day for everybody to come out and learn and be motivated,” Brinkworth said.

Brinkworth wants the festival to shed light on the diversity of the guitar community as well as the number of people involved. The festival catered to all types of music, not just specific genres or niche genres, he said.

“My mission in music is to, you know, pass on the joy of playing,” Brinkworth said.

The festival featured musicians such as Ray Bell, Murray Pulver and Justin Bender, among others.

Justin Bender, of Third Ion, was one of the guitarists at the festival. He spoke about his style of play and performed. (Dean Gutheil/CBC)

Bender is currently the guitarist for the Regina progressive metal band Third Ion, which was nominated for Artist of the Year in the hard rock/metal category at the 2016 Canadian Western Music Awards.

“Everything I do is kind of thanks to guitar,” Bender said.

Bender also played guitar in the Canadian metal band Into Eternity for seven years, which allowed him to tour the world and opened opportunities for him in music.

“I was a dreamer,” he said. “I definitely dreamed so that’s why I did it.”

Bender said the music he plays and writes uses uncommon time signatures and techniques. He took lessons early on in his playing but the strict nature of the lessons turned him off of them.

“I don’t like things to be formulaic with music,” Bender said.

“These guys have great careers and they’re all from the Prairies, so I think that’s a motivator for people to see that,” Brinkworth said. 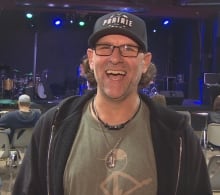 Organizer Jayson Brinkworth said the festival is a celebration of the guitar playing community in Regina. (Dean Gutheil/CBC)

Brinkworth is co-owner of Music in the House, which gives lessons to people who want to learn instruments such as guitar, drums, fiddle, piano and voice. He noted that there is a growing music community in Regina and said there has been an increase in the amount of people enrolling in lessons.

“It’s great because people want to learn and the internet hasn’t numbed everything to the point of just sitting in front of your computer to learn,” he said. “You want to learn from another human being and get better so that’s encouraging.

Brinkworth said the guitar festival will continue next year and beyond.

“I’d say ‘cautiously optimistic’ but I’m not very cautious about it,” he joked. “I’m very optimistic it’ll happen again because I think the community in town is great.”

Tickets were $15 for the festival. Doors opened at 12 p.m. and the festival was scheduled to end at 6 p.m.